So, Isabella (she’s 10) is taking July off from gymnastics to heal up her knees, but the coach wants her to keep conditioning. Today’s task is to do 300 crunches. She demonstrates. I stop her after about five.

Me: Honey, those are not crunches.

Iz: Yes they are.

Me: No, that’s like me trying to get out of bed. And it takes me a good while.

Me: Like, I said. Not exercise. Because, if it were, I’d have double six packs, instead of a keg.

You know how sometimes everyone hates you, but you toast some bread for them because you are their father. Then you hear: You put the butter on the wrong side!

The local LA indie/artsy radio station KCRW is playing David Bowie all day today. He died last week. I can’t turn it off. It’s a somber day of reflection for me.

That doesn’t mean I won’t be insulted. Because, kids.

On the drive back from gymnastics with Isabella (the newly minted nine-year-old), the radio plays a version of the ’80s hit “Let’s Dance” that was re-mixed sometime around 2000. It’s all Spanish-y guitar and a melody that most people would call a harmony part with lousy voice leading. (Inside musician joke.)

Me: David Bowie. You know, you have the same birthday as he does.

Iz: Whatever… Was David Bowie old when he made this?

Me: Well, when he first recorded it, he was probably in his mid-30s.

Iz: But, was he old when he made this?

Iz: Wait! What? You mean you could still make a song. Even at your age?

Me: Well, yes, I suppose I could. I try sometimes.

Iz: But, it wouldn’t be popular.

Iz: Because, you’re not very popular.

Me: Thanks for that, Honey. I was never very popular no matter what age. It’s probably why I loved Bowie so much.

Iz (on the bright side): But, I know you’re popular with 5 people. Me and Julianna. Mommy. And, Grandma and Grandpa… Though, some more than others.

Let all the Children boogie.

Snuggling up with Julianna (she’s 10) at bedtime, she has to crack every damn joint in her body: Knuckles, Spine, Knees, Toes, etc…

Me: You know, Mommy (with dubious scientific facts to support her argument) said that constantly cracking your joints will make them get big and fat.

Julianna (without skipping a beat): So, how much did you crack your belly?

On the Eastbound 134 in LA, the traffic sign flashes “Heavy Traffic Ahead. One Direction. Use Alt Route through Pasadena.”

This puzzles me. I’m going in One Direction like everyone else, eastbound. Through Pasadena. Is there an Alternate Route?

Then, slowly, ever so slowly, it dons on me… “One Direction” is a Band! (Or at least a bunch of good-looking singer boy-types playing at the Rose Bowl. In Pasadena.)

I m stuck in “One Direction” traffic.

I worm my may over to the next-over lane and make an exit onto the Last Ditch Road to Get Over Before Being Crushed Against the Side-Rail Forever.

I’m Calm. I make my way to the Glendale Avenue.

Me: Girls, this trip was Horrific! Do you even like One Direction?

J: No one likes One Direction anymore. You’re so old.

Me: You don’t care about how much I struggled to get here.

J: No.. Because you don’t care about your anytime hours.

Iz: Merlin… Merliiin… There’s my Dumbo. There he is!

Iz: Daddy, it’s because he has big floppy ears.

She scoops him up and leaves the room without saying a word. 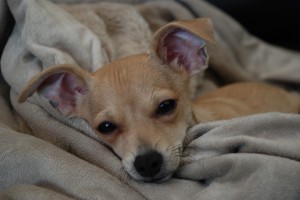 I be done seen about everything, when I see a chihuahua fly.

Julianna (she’s 10): Daddy, underwater with my goggles on, your stomach is huge!

Me: No, Honey. It’s called “Disfraction.” (I have no clue. Making it up.) Light waves bounce around and amplify. Water does crazy things to light. But, your perspective changes. And, when you consider your goggles, there’s some crazy Hollywood mojo going on.

J: No. Without my goggles. That’s your stomach.

J: What is he saying?

Me: Billy Joel? “Only the good die young.”

J: Why is he saying that?

Me: Tell me about it.

J: Huh, what?… But you are a Good person and you’re not dead yet.

Me: Well, maybe I am not as good as you think, I suppose.

J: But. You are not Terrible. And, you are also not Great.

Me: Ego calibration in tact.

Me: Thanks you for that.