Me: It’s like a bump in something. Usually, its bigger than just a bump. Like my belly. My belly is a big bump. A bulge.

But, what’s the difference between “Speed” and “Speeding?”

Iz: Because, we just passed a police motorcycle.

Iz: Daddy, what is crap? Speed?

I haven’t mentioned last week’s gymnastics competition in Las Vegas. Partially, because it took us 7 and a half hours to get there through the El Niño rain, and then 8 and a half hours(!) to get home. Normally, it’s about 4 hours, 5 tops. So, obviously, I’m not frustrated or scarred from fighting children in the back seat. And, the screaming adults from the front seat. Or, the “let me take a minute” while I walk off my anger on the shoulder of the I-15 outside of Barstow.

This was one of those Big Deal gymnastics meets for Isabella (she’s 9, by the way), where girls from several states get together.

Isabella, of course, took 3 golds and one silver in the individuals. Because she is awesome, and deserved them all. East German judge and all.

But, I have a problem.

The powers behind this meet have divided the contestants into many, many subgroups. So that everyone ends up with a medal. The 8-year-olds, 3-6 months: Gold. The 6-year-olds doing a somersault. Gold. The 10-year-olds wearing a blue leotard: Gold.

So, the awards ceremony takes almost as long as the competition itself. And, everyone gets a medal.

Now, I’m all for acknowledging all of the gymnasts who competed. And, I have sat through plenty of “tied for 18th place” celebrations. And, they are celebrated. With ribbons. Because, at this stage, the girls are trying their best, and should be acknowledged. Good Job, Honey!

But, in Vegas, Everyone’s a winner. Allegedly. Everyone. They all get medals. Top 6. Medals.

There was one girl who was the only one in her category (10-years-old, red-hair, Pisces, left-handed, favorite color: Magenta). They basically threw all of the Gold medals at her. And, she was like: What the hell? I thought this was an actual competition.

Everyone gets a medal.

Here’s why this is wrong. My daughter, who had one of the overall top scores, doesn’t know where she stands among her peers. (She crushes them, by the way).

I asked the coach:

Me: So, does everyone get a medal for showing up?

Coach: Yeah. This is one of the fun meets.

Bullshit. Because, after the entrance fee, the admission fee, the Vegas hotel room, the 15-hour round-trip drive/scream-fest, the gas, the meals, and all of the frivolity, I want to know how my daughter stacks up against the other girls. This meet alone was about a thousand dollars. Srsly?

Because, if she ties for 18th place, then maybe next year we won’t do this. But, there’s a lame Gold medal awaiting. So….

Oh, I see…. They have a business model.

How do we make a semi-OCD, definitely anxiety-prone daughter go crazy? Welcome to Vegas.

One of those arcade Quarter-pushing games. 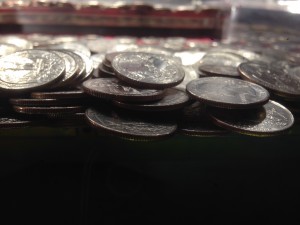 Circus Circus Arcade. Las Vegas. One of the many ways Vegas takes your money.
Daaaaad! Stop!

On the way in to school, the girls insist on controlling the music.

Someone named Ke$ha (though, I think she now goes by “Kesha,” because she finally wants to assimilate into American society.)

The song is “Die Young,” typical disposable pop music with some of the worst rapping you are likely to hear. This side of me in the shower doing Young MC’s “Bust a Move.” (Try to wipe that visual out of your mind.)

Isabella (9): Hahaha! Good one, Julianna! Because, Daddy. You see, you are already old. So you’ll never die young! Only old!

Me: Yes, Sweetie. I understand joke structure. And, I appreciate a good diss when I hear one. Like in a couple years, when they ask you to spell “vengeance,” and you spell it T-O-U-C-H-É.

Me: Time-relea$e… You’ll understand one day.

Julianna (she’s 11) is steadily improving on the violin. Her musician mother and father couldn’t be happier.

Me: Honey, what key is this piece in?

J: Because, the key signature has an F hashtag and a C hashtag.

Me: Sorry, Honey. As a musician, I have failed you. And, sadly, it probably won’t be the last time in your life that I do that.

J: I know, Daddy. That’s Ok. This wasn’t the first time, either… Sigh…

I’ve been giving Isabella (she’s 9) a hard time lately (if you’ve followed the blog). But, sometimes she is spot on right.

On the way to gymnastics:

Iz: Who are we listening to?

Me: The Beatles. Sgt. Pepper. One of the greatest songs ever.

Iz: Yes. I love this song!… Mommy is a musician. Right?

Me: Yes. Mommy is a fine Musician.

(Then, the words that cut…)

Iz: You used to be one of those, too. Right? A musician?

As I arrive at her designated drop off. I swear, there’s something in my eye.

It’s not even 9am on a Saturday. A Saturday! And I have people yelling at me.

And, by people, I mean 9-year-old Isabella.

I flip on the TV, and it is still on last night’s Science channel. Right now, they are talking about the moon and gravity and tides. (I’m leaving out a lot of nuance here, but you’ll get the idea.)

Iz: Daddy, what are tides.

Me: Well, the earth and moon have gravity, right.

Me: Well, you don’t know about tides.

Iz: Yes, I do. Because, the moon and the earth have gravity.

Me: I just told you that! You asked me about tides, and I’m trying to explain. Do you know the moon’s gravity affects the earth?

Iz: Of course. It makes the waves. Everybody knows that.

Iz (ultra-pissy): Yes it does. Tell me something I don’t know.

Me (and, I said this understanding the full ramifications at 8:46 in the morning): Ok, here’s something you don’t know. You won’t get breakfast on this beautiful Saturday morning.

Tears streaming. Arms flailing. Legs thrashing. The whole 9 yards. (And, then some)

Me: Do you want to hear about gravity?

Me (pressing on with the lesson-of-the-day): Sometimes the moon’s gravity pulls on the ocean and makes the water come closer to the land. Sometimes, the moon is on the other side of the earth and it pulls the water away from the land. That’s a tide.

Me: Of course you did. Because that’s why you asked me what a “tide” was.

Me: Honey, there’s a transcript.

Me: Do you want Honey Nut Cheerios or waffles?

Tonight’s potential sending out a neighbor-calls-911. It belongs to, let me check my notes… Isabella. (Because, aaaaaaaaah!)

I get her home from a full-day of school and gymnastics practice at around 8:00. Iz is hungry for dinner. Also, she wants the iPad, which her sister has. Oh, crap.

Considering what happened in the car on the way home, this is time for her third meltdown. In 20 minutes.

Now, it’s food. I re-heat her chicken sandwich from yesterday’s Fat-Burger Chicken Sandwich. Not a commercial, but yum.

So, there were a few triggers: It’s late. Julianna has the iPad. Her sandwich is soggy.

Obviously, I am to blame for all of that.

Me: What do you want to eat? Because, chicken!

Iz: I don’t care! Not Chicken! Anything! My belly is empty! Julianna gets the iPad! Why?? I want Breakfast!

Editor’s Note: I don’t generally respond well to being yelled at while trying to solve a problem created by a ridiculously narcissistic personality in Hollywood. Which is why I am a Hollywood failure. But also: Bitching about my 9-year-old. And, she is full of shit.

Me (I’m now under-my-breath yelling): Ok, do you want cereal?

Iz: Why would you say cereal, when I said I don’t care! Eggs!

Me: Because, you said “I don’t care.” Now, you specifically want eggs.

I made her eggs, which she didn’t really eat.

Eventually, the whole family was involved. There was lots and lots of yelling. And, I’ll be sleeping on the sofa for a couple of days.

Ultimately, Minecraft fortified their sisterly bond. And that is great. But, they are taking years off of me.

[Admittedly, not a great post. Emotions are still raw…]