Like everyone else in Los Angeles, I have a Space Shuttle Endeavour fly-over story. Not a great one, mind you. It’s not like I flew on the thing, or saw it take-off. Or, I designed it.

Here’s something you probably don’t know about me. I was destined to be the world’s greatest Aerospace Engineer before answering the call of Mozart and Beethoven. Endeavour could have been my baby. Damn musicians!

I totally fell in love with the idea of Science watching Carl Sagan’s PBS series Cosmos. It was the early ’80s, and billllions and billllions of viewings later, I just knew that I was going to be the first Man on Mars. For Christmas in 1981 (or maybe ’82), my brother gave me the best Christmas gift I have ever received: Sagan’s book Cosmos. Epic. Best gift ever. Seriously. (Thanks, Bro!)

After escaping high school (the science-loving, piano-playing geek. Not Cool Kid material.), I spent a year-and-a-half as an Engineering major at Virginia Tech. I hoped to design the first space station tourist destination. I even had a name for it: The AriSTARchus, named after one of the great ancient Greek astronomers. Ah… the lofty dreams of youth.

But, by that time, a certain J.S. Bach had grabbed my attention. And, Haydn. And, Debussy. And, Joplin. And, Gershwin. And, Ellington.

While I have never denied my artistic, musical pursuits, I have always felt a tug to my scientific side. So, the Master’s degree in Computer Music makes perfect sense. Arts and Sciences intertwined.

Now, back to the Shuttle.

Lynn (the Mommy here at Daddy/Daughter Fun Time) and I have divergent strategies on the viewing. She’s heading for Lake Hollywood, close to the planned fly-by of the Hollywood sign. (Yes, there is a “Lake,” (i.e. reservoir) that supplies water to, well, Hollywood.) 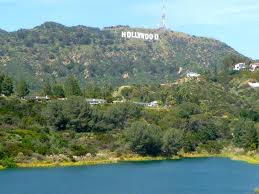 I tell the boss, “Gonna take a couple hours mid-day…” He’s Ok with that. (Freelancing in Hollywood has very (very!) few benefits. Screw you, dude. This is one of them.)

The local TV stations and newspapers all tell us where the optimum viewing will be. The Griffith Observatory. Universal Studios. The Getty Center.

I head up the hills, to Mulholland Drive. I then climb to the very top of Runyon Canyon. Uphill. In the heat. Yeah, 105 degrees. 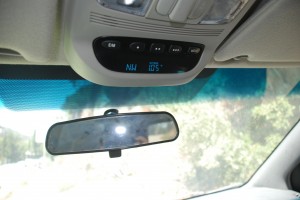 I know the Perfect Place. I am there. 360-degree views. All of LA at my feet.

Now, if only someone had remembered to bring some water. Shit.

I find my spot at the top (tippy top) of the Hollywood Hills. 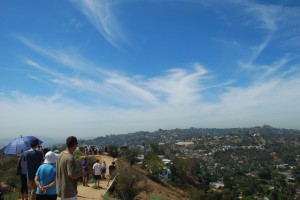 360-degree view of Everything.

Here she comes, Endeavour. From the west over Santa Monica. A little dot through the haze, hard to distinguish between the birds. Then, more clearly, a flyover of Downtown LA. Endeavour does a complete U-Turn and heads toward the Getty Center (by the way, the Getty is an amazing Museum. A National Treasure).

The Shuttle is moving as slowly as possible without falling from the sky.

Then, Endeavour starts to head my way. On top of Runyon Canyon.

She flies right over my head.

Just a couple hundred feet over my head!

Ok, if you’ve ever seen a 747 in person, you know that that’s an enormous plane. If you’ve ever seen one flying 300 feet above your head, then you know it is an awe-inspiring moment. Now, add one small detail. Say, um… a freaking Space Ship on top of it, and you will cry.

My eyes well up. Part of it is national pride. Part is a celebration of all things Science. Part of it for my childhood excitement of NASA and memories of Apollo, Viking, Enterprise, Challenger, and Columbia. And part of it is from the sheer thunder from the 747’s massive engines inching the Shuttle through the sky.

The crowd cheers. And, even though I’m not a woo-hoo kind of guy, I’m cheering, too, top of my lungs. And, I keep snapping pictures.

The funny thing about taking pictures: When you’re looking through a camera view finder, your perspective changes so much that you miss the actual event. I took about 200 photos, but kept dropping the camera ever so often so that I didn’t miss the flyover. Of course, every time I dropped the camera, I yelled at myself: Get the Damn Picture! 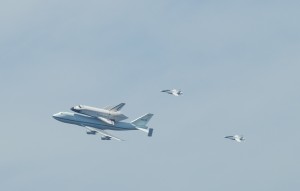 My newest, bestest Friends of Science are all elated. 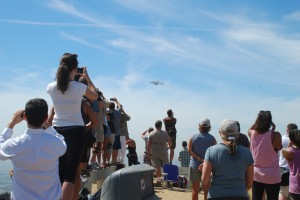 Friends of Science. And, oh yeah. A Space Shuttle!

This isn’t just a Once in a Lifetime event. It’s a Once Event. Never to be duplicated.

We watch as Endeavour makes her way eastward toward Pasadena’s Jet Propulsion Lab, then she turns again and heads south. Toward Disneyland. The Happiest Place on Earth is about to get even Happier.