So, for about five minutes this week, I was concerned about the latest trend in young-woman-body-image issues because I have a couple of girls heading there soon. There’s, apparently, something called a Bikini Bridge. Because, too thin is never Too Thin.

A Bikini Bridge is when a woman (a girl, really) has an abdomen so thin, that her hips extend farther than her stomach when she lies down. This causes the elastic waistband of her bikini bottom to get some “air” under it, making a cross-pelvic bridge. It’s hard to explain. But here’s a picture. 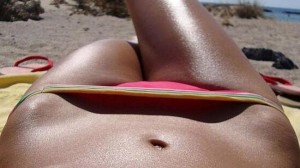 I searched high and how to find a good image. If this one isn’t good enough, I can research more.

But, here’s the best part:

A Bikini Bridge is actually NOT the latest trend in body obsession. Turns out, the whole thing was a HOAX created by some idiots on 4chan (yeah, I didn’t know what it was, either) who wanted to try to create a stir, the next “thing.”. (Apparently, 4chan it is legit because it is a .org, not a .com. So there ya go.)

The Internet gobbled up this bridge thing the other day and began spewing out how girls have given up on Thigh Gaps and are now obsessed with this ridiculousness.

But, the Bikini Bridge is fake.

Buzzfeed has a great accounting of the ploy. Buzzfeed’s Bikini Bridge

Don’t worry, your daughters are actually, really not worried about this. It’s not a thing.

Information Fact-checking. This is why you keep me around.