Regina, our good friend works in the casting office at General Hospital. They were shooting some Halloween scenes and needed adorable kids. Regina gave us a call, because, well, you’ve met the girls.

And, because absolutely no one asked to see these shots, I thought I’d offer them up.

Julianna, obviously the most talented one, here on the extreme right.

Not to be outdone, Isabella showed up on Nov. 4. She was actually featured! With the line “Trick or Treat!” (I hope I am not violating copyrights by quoting that.) 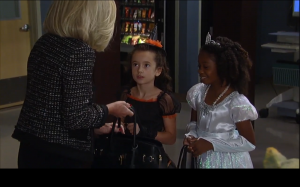 She’s the obviously more talented child on the left, in case you didn’t know.

Oh, and she was having a great Hair day:

Thanks again to Regina. And, no… Don’t send me your head shots to pass along to her. That’s not how this works.

For the most part, we spent our time floating and sliding through the water park known as Hurricane Harbor.

I’m not sure when I last saw so many people wearing such ill-advised bathing suits. (Fingers also pointed this way, by the way.)

Or, iller-advised tattoos. (Seriously, there was some monumentally bad ink on display. But that’s not my thing.)

One of the biggest attractions at the Harbor is the Wave Pool. It simulates ocean waves. In a finite area. With people in inner tubes. Big people. Versus seven year-olds.

It wasn’t so much a water feature as much as a mosh pit circa 1982 Black Flag. With kids. Waist deep.

Julianna (she’s 9): That was Awesome!

I think I pulled a hammy.

Hurricane Harbor. Only imagine 4x the participants over the 4th of July weekend. I “know” more people than I ever imagined.

Also, as the weekend ended (on Monday), a couple hours after we sized up the the Ninja roller coaster, a pine tree fell across the track and derailed the train. People were left dangling mid-air for three hours. Minor injuries, but you never know. (Maybe they should pay more attention to details.)

Fun Fact: A couple years ago, on a cold, rainy afternoon when there was almost no one in the park, my family and I rode the Ninja 19 times in a row. (A record, at least according to the coaster attendant.) We didn’t have any problems with falling trees. (Though, from now on, I will keep looking overhead as well as behind my back. I’m not just twitchy. There’s a rationale.)

You know how sometimes you suffer through a two-hour tantrum with a seven-year-old. And, you go through every stage of the self-help Parenting Catalog of techniques:

– Caring Dad: Honey what is really bothering you? “AHHHHHHH!”
– Stern Dad: Put on your shoes. Now! “AHHHHHHH!”
– Ignoring Dad: “You’re ignoring me. Why doesn’t anyone LIKE me!!!!!?”
– Earlier Generation Dad: I’ll give you something to cry about. Where’s my belt?
– New Age Dad: Find your Chi, Sweetie. Find your Chi.
– Sports Dad: Oh, look. A beer and a game. And headphones. (muffled “AHHHHHHH!”)
– Married Dad: Your turn.
– Guilting Dad: When I was a kid, we were so poor that we couldn’t afford shoes. And, I bought you this house.
– Deafened Dad: Stop Screaming! “I am not SCREEEEAMMMIIINGGG!”
– Time-out Dad: From the corner “AHHHHHHH!” for an hour. Bullshit.
– In-control Dad: I am in the middle of a sentence. Do NOT interrupt me.
– Most Wanted Dad: Really, Officer? The neighbors are complaining? You see, I have a seven-year-old. She won’t put on her shoes.
– Diplomatic Dad: If you put on your shoes, then maybe we can talk about going to the park.
– Authority Dad: You just lost the park. “AHHHHHHH!”
– Equitable Dad: Look, I made breakfast. I brushed your hair. I did your laundry. I’m willing to go to the park. Just put your shoes on. “AHHHHHHH!”
– Reasonable Dad: If you put on your shoes, I will tie them for you.
– Birds and Bees Dad: You exist because of me. Put on your shoes.
– Blaming Dad: We’re not going to the park. And, it is all your fault.
– Too Literal Dad: Put your shoes on. “I already have one of them on! You said ‘shoes.’ That means more than one. I already have one on. I don’t have three feet. How many more shoes do I have to put on?”
– Absentee Dad: … “AHHHHHHH!”
– Step-Dad: “You’re not my father!”
– Child-Whipped Dad: Put your shoes on and there will be ice cream and unicorns and rainbows. I can make all of that happen.
– Mafia Dad: There are only two ways that this can go… And one does not end well for you.
– Hygiene Dad: You realize that you can’t go outside without shoes. Because of all the germs.
– Higher Authority Dad: Would your teacher let you come to school like that?
– Highest Authority Dad: Because Mommy said so. “AHHHHHHH!”

None of them works. It turns out you’re a shitty, shitty father.

Snuggling up with a small child at bedtime, parents always ask several questions: Are you warm? Are you comfortable?… Are you asleep? And… Can I go now? Yes, Honey, I love you, but, come on… It’s late. And, I’ve got … Continue reading →

I will pay for your college education.
I will stomach your boyfriend.
I will stomach your girlfriend.
I will celebrate your graduation.
I will finance your apartment.
I will help you “find yourself.”
I will indulge your tattoos.
I will call the mechanic.
I will get you on your feet.
I will respect your decisions.
I will help you become the woman you were meant to be.

I will be your father.

A Most Romantic Evening:
Mommy and Daddy on the eve of Mommy’s birthday: In the hot tub, with the bubbles, under the stars, looking at old Christmas lights dancing around.

This is not going according to plan.

But, I’d still marry her. Even after meeting her family.

7-year-old Julianna practicing her reading skills by telling me what the supermarket aisle signs say. Things go well until Aisle 12…

J: “Feminine Needs.” Daddy, what does that even mean. What are THEY?
Me: Well, Honey… Um, since I work for Disney, I think I’m required to say: a Handsome Prince and Talking Animal Sidekicks.
J: (Blink.) Daaaaaaad! Why are you like that?

Yes, I know. Wrong aisle number. I was at a different store when I had my camera. So there, Mr. Gottacorrectsomeonestein.

There’s nothing like “air conducting” the girls to a rousing rendition of the William Tell Overture to get the blood pumping in the morning. Things petered out, though, when the woodwind section left the performance to brush her teeth. The string section then followed suit to put her shoes on.

Maestro Daddy was left flapping his arms at the brass section of forks and spoons. They ignored him (as is usual for a brass section).

I’m amazed at how a perfectly peaceful house with two little girls can go from zero to 100 MPH in no time flat.

In the ’80s, if you had told me that there would be a couple of beautiful girls crawling all over me in bed, I never would have believed you. (Trust me on that.)

A few decades later (and a MILE of context away), I realize that you actually would have been correct. No need to wish me a Happy Father’s Day… Julianna and Isabella make me feel special every single day. And hats off to Mom!