Getting in the pool with 9-year-old Isabella…

Me: Is his name Paul McCartney?

Me: Well, you said Beatle. with Wings. So, Paul, then.

Iz: What are you talking about?

Me: Certainly not Ringo. And John and George have left us.

Iz: Can I splash you now?

I realize that I have have neglected my DDFT fan base by not reporting on Isabella’s (she’s 9) International gymnastics competition.  A Gold Medal (i.e. Best in the World), a couple of silvers.

And, I have boasted and boasted about her to anyone with at least one functional ear.  And, I sing:

“She is a Champion, my friend…”  Freddie Mercury rolls over in his grave.

Since, we are talking music, here’s my story..

Leaving Los Angeles (from the Burbank airport, because LAX is, I believe, one of Dante’s rings of Hell) heading to Atlanta.  (Long story, spending the night at Grandma’s before we all drive down to Orlando.  World of Mickey Mouse.  Look at my joy.)

Back in Burbank, at the Southwest gate heading toward a layover in Las Vegas, I want my phone charged to 100%.  I spy a three-seat charging station.  The middle seat is empty.  I dash.

As I approach, I notice an obvious Rocker-type guy:  Middle-aged, long curly black hair, blue jeans, Quiet Riot T-shirt.  He says something to the guy in seat number three.  They are together.  Seat No. 3 guy is more clean-cut, short hair, tweed sports jacket.  But, he obviously rocks.  He’s got ‘tude. 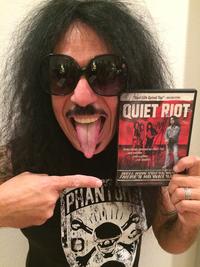 I sit and charge up between them

I glance over at Seat #1 guy.  He’s looking at a Quiet Riot website.

Whenever I’m in these situations, I usually employ the Urinal Rule (“Eyes Forward, and Don’t Talk to Your Neighbors”).  But, this time, I couldn’t help myself.

Given the hair, T-shirt, and the Website, it wasn’t that much of a leap.

And, I swear to you, my mouth and hand were reflexive.

Me: No shit! (while my hand formed the devil’s horns rock gesture.)

Me:  Are you playing in Vegas.

#1 (clearly not wanting this conversation to continue): No, we’re hooking up with the rest of the band and heading to Santa Rosa for a show.  (Then) Hey #3 (whatever his name is), did you call Bob…

This was my cue.  I took my 86% charged phone and got up and headed back to the seat next to future World Champion, Isabella.

Me: You see those guys, they are rock stars.

Iz:  The ones with the Southwest uniforms.

Me: No, the guy with the hair like Mommy.  And the other guy.

She goes back to playing on the phone.

Meanwhile, I furiously Google Quiet Riot.  #1 is Frankie Benali, the only long-time member of the band.  He’s the drummer and also manager.  #3 is probably Chuck Wright, but I don’t really know the band like John, Paul, George, and Pete.

When we board, I notice that Wright (with what looks like a bass guitar on his shoulder) has a higher boarding number and gets a better seat than Benali.  I’m guessing the people who handle their flight arrangements are in fact, Benali and Wright themselves.

When we land in Vegas, I notice Benali standing by the gate, looking for Wright.  I resist the urge to ask for a selfie.  But, I secretly do the devil horns thing with my hands…

Note: The only head banging on the flight occurred when we hit some turbulence over Barstow.  Always keep your seat belts on.